While Michael and Jon were laying down the foundations of what would become the very first Volbeat songs in Denmark, Diamond Distillery started distilling what would become Volbeat Limited Edition Rum across the Atlantic in Guyana. It’s an exceptional single estate rum from Guyana exclusively limited to 2,400 numbered bottles, tapped from nine different casks in carefully selected Volbeat anniversary packaging.

Note from Michael:
“It’s important to celebrate the good things in life, and a milestone anniversary calls for a milestone spirit to celebrate with. When we realized that Volbeat was about to hit the twenty year mark we started looking for a special rum that we would be proud to call the first small batch Volbeat Rum. What we found was an incredible rum with a rich and pure taste with scents of vanilla, wood and leather that just happened to be aged to perfection starting twenty years ago. We hope you enjoy this uniquely distilled and packaged rum as much as we have enjoyed bringing it to you. Here is to another twenty years and beyond.” 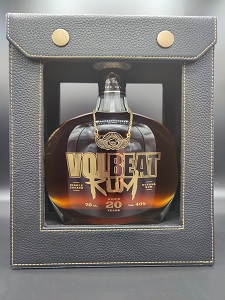