It is brewed as a tribute to all the friends of hard rock music and Belgian style ales in Quebec and throughout the world.

Heavy metal has played a very influential role in the history of Quebec’s musical development and Quebec city has the reputation of being one of the metal music capitals of the world.

It is a closely-knit culture characterised by very passionate and devoted fans, much like that of Unibroue’s refermented ales.

So it shouldn’t be a surprise that when Dave and Jerry’s paths recently crossed, their mutual passions for both arts would spark a desire for a Megadeth beer brewed by Unibroue.

And so À TOUT LE MONDE Ale was born, inspired by the most popular hard rock song to feature a chorus sung entirely in French, and whose video is in the Music Hall of Fame of Quebec’s most popular TV music show. The beer is a refreshing and artisanal Belgian Style Dry Hopped Saison and the label appropriately and prominently features a symbol that is synonymous to Megadeth, their well-known mascot Vic Rattlehead. 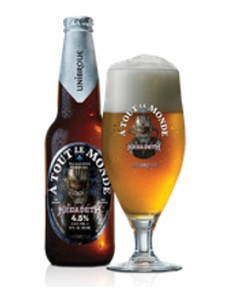