IRON MAIDEN and Robinsons Brewery have today launched the limited edition Day of The Dead version of their award-winning TROOPER beer.

Following on from the huge success of last year’s release, the bottle features a brand new design of IRON MAIDEN’S iconic mascot Eddie, and references the artwork of their 1990 album ‘No Prayer for the Dying’. Mexico’s Dia de los Muertos (Day of the Dead) is celebrated annually. One of the most popular parts of the holiday is people turning themselves into skeletons, adorning their appearance with flowers and bright colours. As a result the sugar skull has become an icon of the Day of the Dead and one that TROOPER pays homage to.

TROOPER Brand Manager, Dean Etchells, said: “We are delighted to be bringing a new version of this wildly popular limited edition label for a second year. We loved the response to last year’s version and this time we’re going bigger and better with wider distribution of TROOPER Day of the Dead through our export and off trade partners. We hope that everyone will get a chance to get their hands on one.”

TROOPER Limited Edition Day of the Dead will be available from October to November 2020. 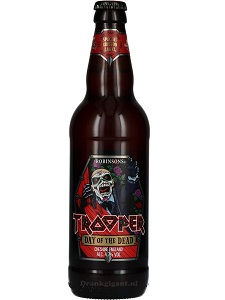