The Swedish metal band HammerFall was founded in 1993 in Gothenburg and has been thrilling the masses with their music ever since. The first works of the band can be categorised more as Heavy Metal, the more current works are pieces of Power Metal. In the summer of 2014, their ninth studio album “(r)Evolution“ was released, which can be perfectly celebrated with this good whiskey: HammerFall Imperial 18YO Single Malt, which was named after the second album.

18 years of maturation give this whiskey its inimitable complexity

HammerFall Imperial 18YO Single Malt is a wonderful whiskey that pays tribute to big events. For the 18th anniversary of the debut release of “Glory to the Brave” they presented this single malt which was rested for 18 years in the Speyside. This great spirit is limited to 1200 bottles, so you should not let too much time pass before you decide to buy it. 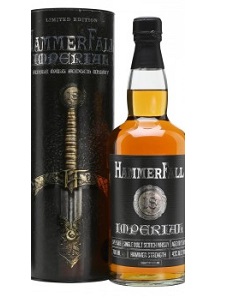