Behemoth Sacrum Beer is brewed in Poland following Belgian example, as a tribute to a Polish band. That is quite a mouthful – as is the beer. This is a project based on passion and knowledge: the brewery created different variations that are all to be understood as liquid homages to Behemoth. The band is one of the most important metal bands from Poland. Behemoth Sacrum Beer is brewed like a Belgian IPA. Different hops varieties from Australia find their way into the brew, which is very fruity and floral. Exotic fruits like pineapple, mango and passion fruit await you as well as sweet malty nuances. The quite hoppy Behemoth Beer is moderately bitter and even a little peppery. Not only fans will fall in love with Behemoth Sacrum. Buy it from us and taste it yourself!

Behemoth have been active for almost 30 years

The band Behemoth was founded in 1991 in the Polish city of Gdansk, first under the name of Baphomet which was changed later. At first, the three musicians led by lead singer Adam Michał “Nergal” Darski moved mainly in the realm of black metal. Over the years, the band found their way to death metal. And when it used to be all about Slavic pride and Vikings lyrically, Behemoth now prefer to sing/growl about satanic rituals. 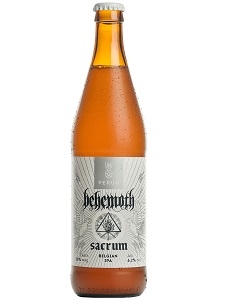